A Conservation Enterprise for Women in Kiborgoch Conservancy 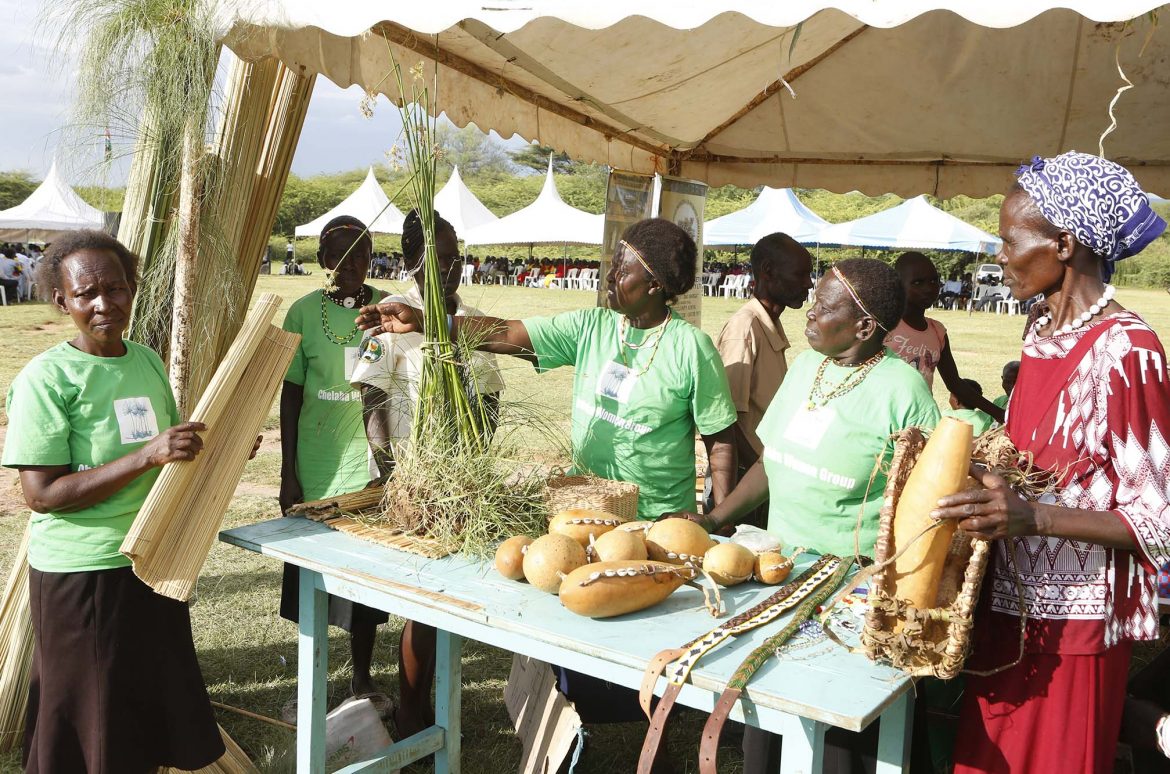 Chelaba Women Group members of Kiborgoch Conservancy are among 21 community based organizations and groups exhibiting at the launch of UNDP’s  Global Environment Facility, Small Grants Programme  (GEF SGP) projects in the Lake Bogoria Landscape.  The 23 member group are elated they have opportunity to exhibit their products at the colorful event, a very rare opportunity. They are colorful dressed in their green T-shirts written the group’s name as part of branding. They are showcasing their business, a conservation enterprise that started 19 years ago. Not only are they showcasing the business, but they are ambassadors of conservation.  The products are made from natural resources found within Kiborgoch Conservancy. This includes;  hand woven baskets, mats, weaved hats and small gourds harvested from the Silagwe tree used to store a popular Kalenjin drink, Mursik- fermented milk smoked with herbs from a special indigenous tree. Occassionaly they make necklaces and bracelets from beads.

These natural resources are found within the conservancy’s wetland area, the Kiborgoch swamp. Kutwe, the Papyrus reeds is used to make floor, bed and table mats and some are used to beautify the ceiling of the house. Mugutie, the roots of the papyrus reeds is used to treat colds. It is boiled and mixed with milk to treat children’s wounds and adults chew it to treat cold and flu. Chebuliny, is a type of a grass found within the wetland used to make weaved hats, baskets and the kayamba instrument. Larawe is long grass found in the swamp used mostly as a roofing material for traditional houses and used as livestock feed for cows during drought season.

The women discovered the benefits of these natural resources not too long ago. In 2000, WWF, while conducting a needs assessment analysis of the natural resources in the area,  introduced the women to the uses of the papyrus reeds. Previously, the community did not know its uses. They would burn it because it brought Tse-Tse flies which affected their livestock. WWF organized an exchange visit for the women to Kisumu to learn more about the reeds and the benefits to the communities living in Ahero, Kisumu where the reeds are also found. Surprisingly, the women were shocked that the men were the ones weaving and very good at it. After gaining the weaving skills, the 3 women brought the knowledge and trained the other group members.  They convinced the local chief about its use and a barasa- a public gathering was held to convince the community and members of the conservancy to reconsider burning it. The community resolved the women to be allowed to harvest and a water trough was constructed outside the swamp for the cows.

The Papyrus reeds grows for 8 months before it is harvested and takes a minimum of 3 days to dry before it is weaved. They use a special needle to sew the mats. The group is diverse and comprises of both young and elderly women. As a group, they have an arrangement to share the reeds and the income is equally shared so that everybody benefits.  The mats for the smalls bed costs KES 250 while the larger mats costs KES 300. The small gourds sell at KES 250 and the big gourds KES 500. The women rely on referrals for sale as they do not have a business marketing plan. Their plan is to make more and be able to sell large scale outside Baringo.

While these natural resources are accessible and usable, the swamp poses great danger and is risky to the women. The swamp is home to reptiles such as crocodiles and Pythons. When it’s wet, Hippos from Lake Baringo and Kamnorok Swamp swim their way to Kiborgoch swamp. However, the women have devised various ways to escape danger. They can only harvest the reeds between 11am -2pm because the crocodiles and python usually come out early in the morning and in the evening. They prefer harvesting bare feet and in some occasions use gumboots as a form of protection. However, gumboots are not protective because they easily sink and one can be swept by the waters very fast. They have learnt to walk carefully wearing  lighter shoes. They have also learnt the art of cornering pythons and crocodiles by harvesting in opposite directions. They also pray before going to harvest. When there are sigtings of Hippos, the women are also alerted by the herders and avoid that area until they disappear.

The women interaction with wildlife is impressive. Margaret a member of the group, host zebras and water bucks in her land and has never reported cases of human wildlife conflict to the authorities “I have never seen the need to report, I appreciate that we have these wildlife, it is just beautiful to see them grazing together with the cows. They can sometimes be a burden because they eat my maize but I can’t do much about it I guess it is allowed” says Margaret.

They are optimistic about the future of Kiborgoch conservancy, however, they wish they could be involved more in the discussions. They seem to be aloof on some of the conservancy projects. They overhead that the conservancy had received a UNDP/GEP SGP grant to support  fencing of the spring for the restoration of the riparian lands and wetlands. Bernadine, the secretary of the group fears that the women maybe locked out of the swamp because of the new project “hopefully, the project will consider women’s access and use of the natural resources because we are members of the conservancy and we will do anything to conserve and protect it.” She says.

The women may have missed the GEF SGP grant but appealed to conservation partners to support the group through skills development “the last time we received training was in 2002, we want to sharpen our skills in weaving and become more professional and be able to market our products abroad.” Bernadine says. “We also want to learn more about conservancies and how we as women can be involved more so that we are not left behind. She says. 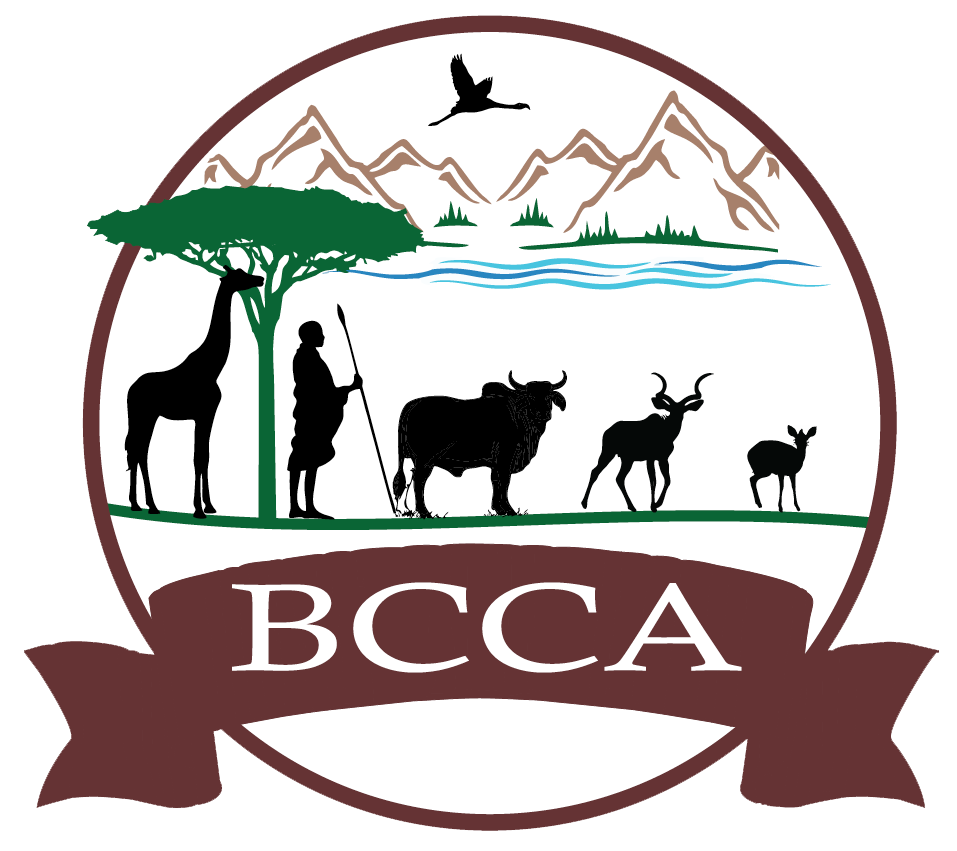